I know 6 little ones that are super excited to see the circus next week! If last year, is anything like this year…… they are in for a treat! SEE blog post from last year

{Contest Info} Win a family four pack to the show on Thursday, January 28th at 7pm. I won’t even make you pile into a clown car – nope – just do any of the following – 1 entry per completion.

Like Loading...
The Ringling Brothers Barnum and Bailey DRAGON circus was amazing!  It was everything the media said that it would be and more!
The kids and I went to the circus last night. What a treat!

The night started with a introduction, question and answer animal clinic. We got a chance to see a few of the animals and their trainers. I thought it was great timing for the kids to maximize what we have been covering this week in home school. One question in particular that I found to be of most interest was how do you control them? The Russian trainer said “with food!” We could clearly see that, as after every single trick, the animals directed himself toward the trainers waist purse or hand for a reward.Cool right?
After that, we went straight into the pre show.  It was almost like a carnival. There was a drawing elephant, jugglers, and even brightly colored clowns walking around saying hello and welcome. We even got to play dress up in the clowns mobile closet. 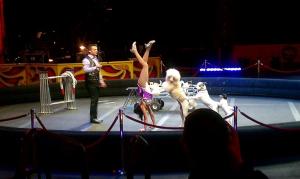 After a few amazing stunts, it was time to start the show! We watched them summon the dragons with acts of strength, courage, wisdom and heart ( which happens to be traits required to summon the dragon.)
The frenzied motorcycle Globe of Steel was one of my most favorite moments. They had 8 bikers in the globe at one time.  It seemed impossible. But they did it and I watched it with my own eyes!     My older daughter thought the first roar the tiger made toward the tamer was interestingly scary .When he asked if we were scared. I thought to myself, Not really! We were outside the gate, by the time that big Mufasa looking lion got finished nibbling in him, we would be way in the elevator at least.

The smaller boys were completely captivated by all of  the daring acts of the troupes, the skillful and graceful trapeze artist and the thrill riding on the tightrope.
Something else that was nice to see were the new animals they brought along. There was a lama, a few donkeys and the cutest ponies. It was the best ever- not your ordinary circus show at all.
Act after act ….was beauty and majestic! As for the ending….. I won’t ruin it for you, but know that it was pretty big. The crowd was screaming in joy and you’ll see why- trust me! So, go ahead and get your tickets. Thinking about the crowd and seating last night it appeared to be a sell out show.

Here are my top four reasons to go watch the Ringling Brothers Barnum and Bailey DRAGONS show:
1. This year, the cats and dogs stole the show!
2. The live music was incredible.
3. The circus included interactive exercising during the pre show and engaged so many young kids to join in.
4. Parents get 190 minutes (give or take) to unwine. The kids will be well entertained.
Remember that you get  HALF OFF kids tickets to the show by using the promocode KIDS at Ticketmaster online or by calling 1-800-745-3000 (Note: ticket offer is not valid on Circus Celebrity, Front Row, or VIP seating. Additional charges may apply.. Valid on all performances except opening night. Other restrictions apply including No double discounts. The circus will be at the Time Warner Arena through Sunday, February 3rd. Tickets are on sale now–get them now while they are still available! Share your favorite circus moments with us on Facebook!
Till next time, QC Supermom
Disclosure: My family and I received complimentary tickets to the show to facilitate this review. No Monetary compensation was received. But in no way has it influenced my opinions and thoughts of Ringling Bros. and Barnum & Bailey DRAGONS.